I am becoming the most accident prone backpacker in the world and I do not like it.

My friends Victor, Louie, and Peter invited me to go with them on a 12 day loop through the Minaret region of Mammoth (Ansel Adams Wilderness). I was elated to be able to get some time off work, but I would only be able to do a few nights… so the plan was to start at the Devil’s Postpile/Red’s Meadow, wind up through Minaret Lake, Ediza, Nydiver, and Thousand Island Lakes, and then I’d break off and take the PCT/High River Trail back to Agnew Meadows to catch the shuttle. However, things did not go as planned, as I will demonstrate below.

Going from 0′ elevation to 8-9k’ requires acclimation, even for some of the best hikers. Our group elected to glamp (glamour camp) one night at Lake Mary in Mammoth.  Lake Mary costs about $20 for a night and has flush toilets and running water…and is set at 9k.’ Great idea right?

After setting up camp and hanging out, we broke off to sleep around 11:00pm with a wake up time of 5am as the plan. It was the longest of nights. We had 2 arguing bears running throughout the whole campground all night, taking advantage of ignorant campers who do not understand what bear boxes are for. Our drunk neighbors also decided to wake up at 3am and clean out their trailer or something. Lame. If that wasn’t enough, my new Big Agnes Insulated Q-Core SL pad did not hold air and emptied out after about an hour and a half (error #1 – do not use a new item of gear without testing it first). I did everything I could to get to sleep but – in the end – I ended up getting maybe 30 minutes of surface level sleep (error #2 – sleep is absolutely essential). The rest of the group also received about the same lack of sleep. Tough night.

We piled into Victor’s car and drove past the gate and into the upper parking lot of the Devil’s Postpile (note: you can only drive in before 7am or after 8pm… otherwise you must take the shuttle from Mammoth Mountain). Each of us enjoyed a quick breakfast (ProBar Meal for me) and a final bathroom break. By around 9am, we were ready to rock. We began our ascent towards Minaret Lake, our first night’s destination. It was to be about a 9 mile ascent and an ascent that starts at 7500′ and ends at 9,8+. 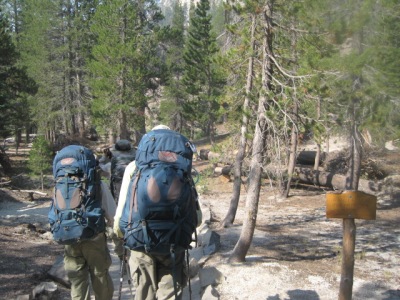 The trail began a gentle ascent up sand and gravel terrain. We were amazed at the amount of deadfall ladden around us, perhaps from the big storm that hit Red’s Meadow last Winter. 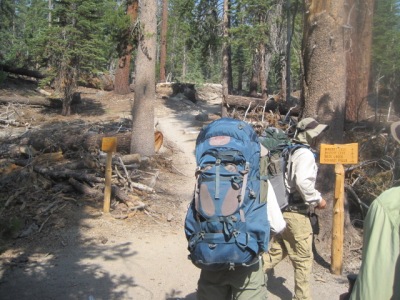 We noticed a high amount of smoke that was being blown over to Mammoth from the large fire burning near Huntington Lake, 20 miles away. However, as the day went on, the smoke lessened and blue sky came out. 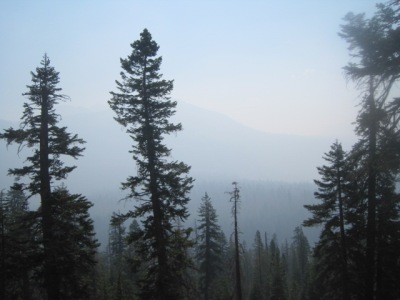 At one point, we came up to three way intersection with a sign. Left and Right indicated the PCT/JMT and right pointed towards Johnston Lake. The trail ahead of us (if memory serves) pointed towards Beck’s Cabin or Superior Lake. Either way, only one person in our group knew the specific route we were taking and we followed that idea. (Error #3 – Every group member should know the route) 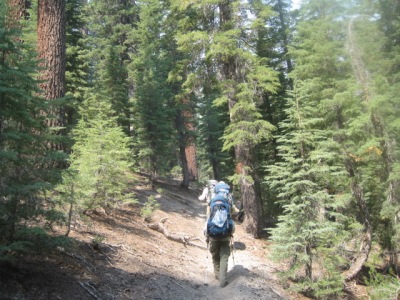 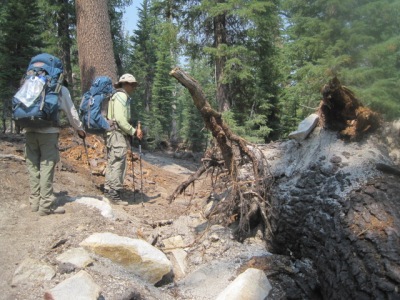 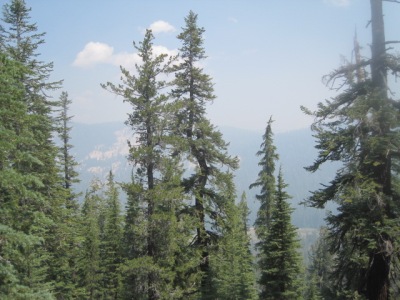 We went from 8100′ to just short of 8900′ when we decided to take a lunch break. It was at this point that we realized we had made the mistake of not turning left at the aforementioned junction. We pondered a couple options:

1. We could head up to 9300′ Superior Lake (where the actual trail ends) and then cross-country up the path of least resistance. This would save us on extra hiking and extra ascent, but we had no idea what that terrain would be like outside of what our topo map told us.

2. We could sleep at Superior Lake and then retrace our steps the next day, going up the trail we should have. The upside would be staying on trail and budgeting our very, very little energy intelligently. The downside would be that we’d be losing a day and if I was to head out from Thousand Island Lake Friday, we would have no flexibility in our schedule.

3. We could descend the incorrect trail and ascent the trail we should have taken. The downside is we’d add distance and elevation gain to that day, perhaps not the best idea given our lake of energy from the lack of sleep, but we’d be able to keep some flexibility in our schedule for the next couple days and we’d be at our planned point.

We elected to try #3. But before we left our lunch point, we were visited by a huge beetle. Cool.

We retraced our steps and took the correct trail towards Johnston Lake. This trail included a really cool bridge.

The trail was relatively flat for about a mile and then began the ascent towards Minaret Lake. It was gradual enough (not as steep as the wrong trail we’d been on). However, because of the lack of sleep and a medicine I am on, my heart rate had been consistently up around 80%. This means that I’d been burning glycogen and any calories eaten and I was aware that that fuel source does run out. (Error #4 – glycogen takes time to build up in the muscles and should be used in small bursts and emergencies. Fat is burned when the heart rate is at 60-70% and should be your #1 fuel source on long hikes). I tried to drop my HR but this was not as easy as one might think. 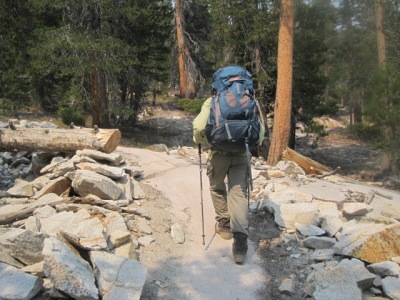 We followed the trail along Minaret Creek and towards our first major waterfall for the day. The scenery was beautiful but I could feel my body struggling. It felt a little bit like altitude sickness, but no headache…just an upset stomach and an inability to push myself harder – and this is definitely uncommon for me. 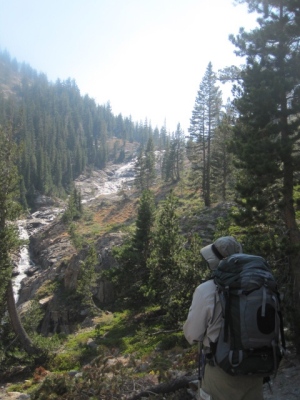 The scenery got even better…

View back towards Mammoth Mountain. Storms out in the far east deserts but not coming our way, thankfully.

We began to see the Minarets for the first time. Absolutely beautiful. 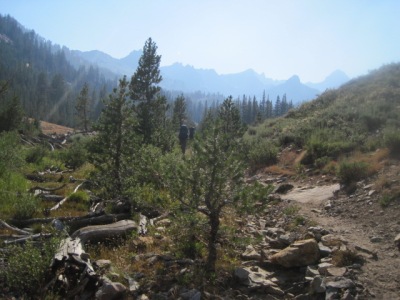 Louie and I were both struggling the most and had used up almost all of our water. This little creek was the most accessible water source and was a lifesaver. I felt quite a bit better after chugging some water and eating some electrolyte chews. 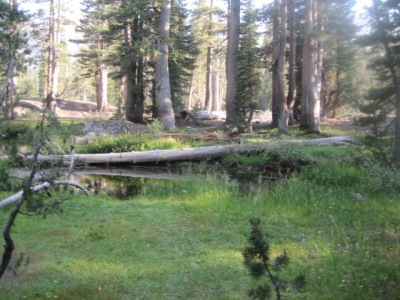 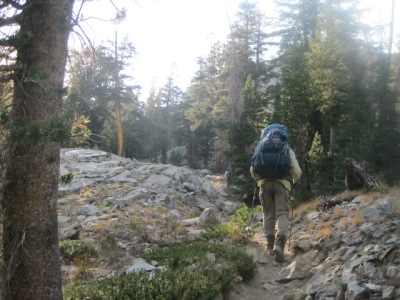 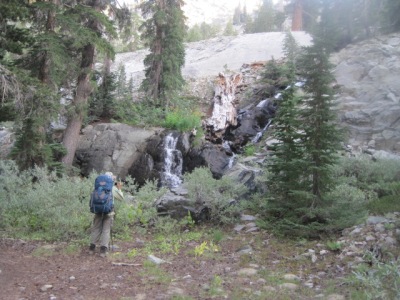 Minaret named Clyde. Absolutely stunning. At this point, we still had another half mile or mile to go with incline. I was struggling mightily and my stomach began to get much worse. I tried to focus on the idea of making camp, but this trail felt like it was ladden with false peaks. 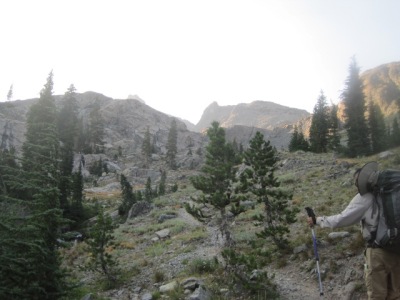 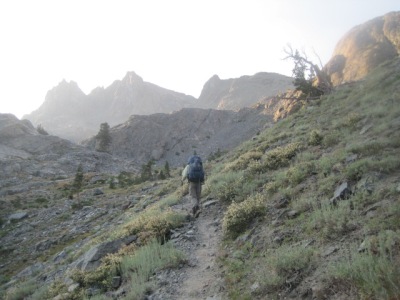 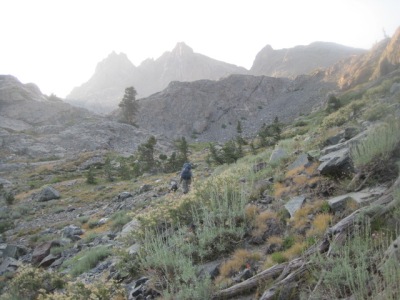 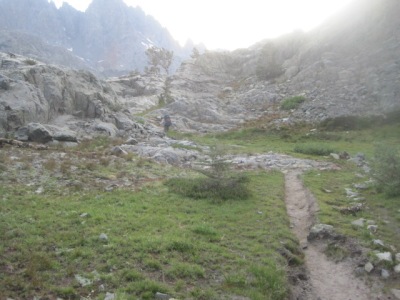 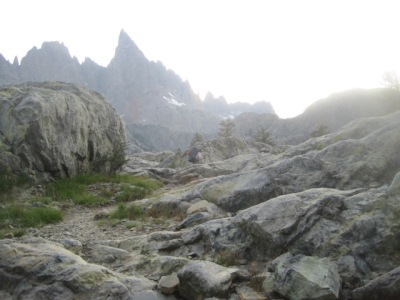 It required the whole group and a lot of fighting but we finally conquered the day’s death march by reaching Minaret Lake.

Beautiful view of the Minarets, the lake, and the glaciers.

We made camp shortly afterward. My stomach would not cooperate with eating. I forced myself to eat half of a ProBar and drink some peppermint tea… and then I started to barf. Gross. My body expelled a ton of water and any food I’d put down. The only thing I can cue that up to would be extreme exhaustion. It’s never happened before.

I went to sleep on my crappy, deflated sleeping pad but it didn’t matter. I was absolutely spent.

The temps went from 80 degrees during the day to the mid-30’s at night (according to Peter’s monitor). I awoke the next morning to my tent rapidly becoming a greenhouse. It felt awesome.

My stomach felt ok for the first 20 minutes but then it started to flip. I also started to get dizzy. We decided to take a 0 day to rest up.

By 1pm, I was feeling worse. My body was absolutely out of whack and I could not seem to rebound. I drank a bunch of electrolyte stuff (coconut water and Cytomax) and took my altitude meds (diamox, gingko biloba, nitric oxide, stinging nettles). Because of taking a 0 day, the next day’s trek would be half cross country travel, essentially going about 10 miles to 1000 Island Lake. This would be tricky for me especially, in that if I had to bug out halfway on that trek, I’d be farther away from the shuttle stop and would be in that much more of a precarious situation.

My body was not improving. At 2:00, I made the extremely disappointing but responsible descision to break from the group retrace our steps back to Devil’s Postpile. To describe how I felt as sad would be an understatement. I had been looking forward to this trip for a long time.

I made it back to the shuttle just before 5 and reached my car at the Mammoth Mountain lot just a bit afterward. My symptoms did not subside much, which told me this was not altitude sickness, but – instead – some major fatigue. I met a couple JMT’ers who wanted to rest up in town and gave them a ride to a Motel 6. They seemed cool enough and I wished them luck just before hitting up the Subway in Mammoth and then heading home.

Travel time – about 12 hours (with breaks)